From the Azurilland Wiki, a database for the Pokémon series that anyone can contribute to
Jump to: navigation, search
← Ditto | Eevee | Vaporeon →

Eevee (Japanese: イーブイ Iibui) is a Normal-type Pokémon introduced in Generation I.

Eevee is a mammalian creature with brown fur, a bushy tail that has a cream-colored tip, and a furry collar that is also cream-colored. Eevee has brown eyes, big ears, and pink paw pads. Its design appears to be based specifically on the Fennec fox, a small fox like animal that are found in desert like areas. It and its evolutions also has traits of raccoons, foxes, dogs, and cats. Eevee is said to have an irregularly shaped genetic structure, enabling it to evolve into multiple Pokémon. Eevee are quite rare, but are able to live almost anywhere, as they may evolve to suit their surroundings. 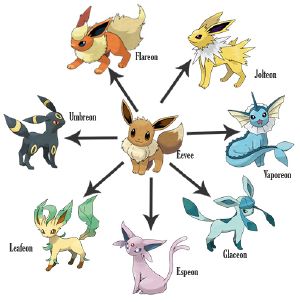 Eevee and its evolutions

Eevee can have either the ability Run Away or Adaptability. Run Away is an ability that will allow the user to run from any wild Pokémon battle, negating the effects of moves that prevent running away like mean look and block. Adaptability increases the users STAB from x1.5 to x2.0.

Eevee are Pokémon with unstable genetic codes. This gives them the ability to evolve into seven different evolutions triggered by the environment, time of day, or the usage of the evolutionary stones Water Stone, Thunderstone, and Fire Stone.

Eevee first appeared in The Battling Eevee Brothers. A little boy named Mikey was hiding the Evolution Pokémon from his three older brothers because they wanted him to evolve it. However, when Mikey's Eevee single-handedly defeated Team Rocket, they were able to accept the fact that Mikey wanted to keep his Eevee just the way it is.

May has an Eevee that hatched from an egg, which she used in Pokémon Contests all across the Kanto and Johto region. When May traveled to Sinnoh, she took it to Route 217 to evolve into a Glaceon.

The Kimono Girls who first appeared in the Pokémon Gold and Silver games, also make an appearance with their Pokémon (all of which are evolutions of Eevee) in Trouble's Brewing. The youngest of the Kimono girls had an unevolved Eevee (the only of the sisters to have one), though it evolved into an Espeon later on Espeon, Not Included.

In Pokémon Adventures, Red is in possession of an Eevee which had been experimented on by Team Rocket. As a result, it could transform back and forth from the three evolutions Vaporeon, Jolteon, and Flareon along with its base form, allowing it greater tactical ability in fighting other Pokémon. Eventually, it evolved into an Espeon, losing its special ability to interchange abilities.

In the Electric Tale of Pikachu manga, the character Mikey (who appeared in the anime episode: "The Battling Eevee Brothers") makes an appearance with his own Eevee and within the chapter that he appears in, Mikey attempts to prove to his brothers that he doesn't need to evolve his Eevee to win battles.