From the Azurilland Wiki, a database for the Pokémon series that anyone can contribute to
Jump to: navigation, search
← Articuno | Zapdos | Moltres → 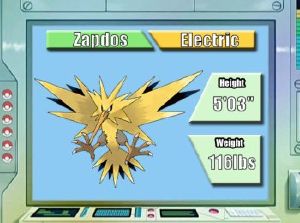 Zapdos in the anime

Zapdos first appears in the anime in the episode Land of the Giant Pokemon.

It is possible that the last bit of the names are puns, because the last syllable of each of the Legendary Birds is a number in Spanish (ex. Articuno, Zapdos, Moltres). Zapdos would then be the second Legendary Bird of the trio.