Winona (ナギ Nagi) is the Fortree City Gym Leader in the Ruby, Sapphire and Emerald Chapter of Pokémon Adventures.

Winona is knowledgeable in Flying-type Pokémon, and is in charge of the Fortree Gym. It is also hinted briefly in the manga that she and Wallace had a previous relationship in the past.

Winona has a very kind and protective personality, especially of those dear to her. She is also very authoritative in her duty as leader of the Hoenn Gym Leaders.

Winona is masterful in her control over Flying-type Pokémon, shown most notably in the final battle between Team Aqua, Team Magma and the Hoenn Gym Leaders.

Winona is identical in appearance to her game counterpart. When in battle, Winona has a special flight suit which consists of a helmet and a pair of goggles. 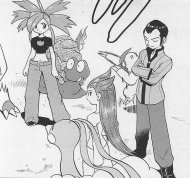 Winona arrives at the Tree Tower alongside Flannery and Norman.

Winona appears before the training session between Norman and Ruby. She complains that Norman should have at least notified the Pokémon Association of his absence, stating that she has been assigned the role of Norman's mentor. Winona informs him that he needs to come with them, to which he complies. Later, as Flannery trains at the Lavaridge Gym, Winona commends her improvements as a new Gym Leader.

Despite this, Winona tells Flannery to commence the briefing. As Flannery informs the Leaders that a group is planning to destroy the Hoenn region, Winona asks whether the individuals involved in the events at Mt. Chimney were the same as those who attacked the Slateport Shipyard, Flannery denies this. Flannery then informs the Gym Leaders openly that she is supporting Team Magma, prompting Winona to state that Flannery isn't lying. Winona then proclaims that she trusts Flannery's foresight.

When the Gym Leaders are separated into two factions in support of Team Aqua and Team Magma, the Gym Leaders ask Norman whose side he is on. When Norman announces he is in support of neither side and leaves, Winona berates him for purposefully disobeying a direct order. She prevents him from leaving by placing a hand on his shoulder, but is brushed off with ease.

Winona states that he is a member of the Pokémon Association, but he refutes this claim and leaves, with Wattson following in his wake. Flannery asks Winona what their next move will be, as she responds by saying that they cannot possibly achieve victory with their current numbers. Winona adjourns the meeting, informing them that she needs to report their progress to the Director. She informs him that the meeting was not a success, as Norman left and Tate and Liza did not show up.

In the middle of her conversation, Wallace interrupts her from the monitor screen. Winona asks what he wants, to which he informs her that the death of Mt. Chimnet resulted in the shifting of balance in the Hoenn region. She asks him to provide more detail, to which Wallace states that Sootopolis City is experiencing an unprecedented rise in sea level. Winona tells him to keep her posted on any new developments.

She asks the Director whether he heard their conversation, to which he reveals to Winona that this can be attributed to the reawakening of Groudon and Kyogre. Winona is surprised by his statement, and realises that everything that has happened up until this moment makes sense, if the Legendary Pokémon are put into the equation. When Sapphire arrives at Fortree City, she is met by a messenger who informs Winona of her arrival. However, Winona is already there, as Sapphire demands to know who she is

She agrees to tell Sapphire, but asks that she remove the berry off her nose first. Winona then introduces herself to Sapphire as the Gym Leader of Fortree City, commenting that she looks ready for battle. She asks whether Sapphire is prepared, stating that Gym rules still apply here, and that she will acquire the Feather Badge if she wins. Winona tells her assistant to hand her her flight suit, as Sapphire summons her Combusken. The two opponents then charge at one another.

File:Winona introduces the other Gym Leaders to Sapphire.png
Winona reveals the Gym Leaders' support for Sapphire.

Winona tells her Altaria to use Dragonbreath, prompting Sapphire's Combusken to seek refuge within the trees. Winona laughs at Sapphire's tactics, stating that she was aware of her next move. However, whilst Winona is preoccupied, Sapphire has her Combusken use Double Team to mask its movements. Winona wonders which Pokémon is the real one, as her Altaria is knocked onto the ground. She commends Sapphire's skills, and she reveals that her Combusken has trained strenuously for this one moment. As Combusken evolves into Blaziken, Winona is surprised, as it uses Blaze Kick on Altaria.

However, as the smoke clears, Winona and Altaria are nowhere to be seen. Sapphire wonders where they have gone to, as she checks her Pokédex's entry on Altaria. Realizing too late, Altaria pummels down upon Blaziken with Sky Attack, thus winning the battle. Winona walks towards her, and reveals the flaws in her strategy. She states that she will coach Sapphire to become a stronger Trainer, as the other Gym Leaders reveal themselves. Winona reveals that they brought Sapphire here as a test to prove her worth in the fight against Kyogre. Wallace then arrives on the scene, as Winona wonders who he brought with him.