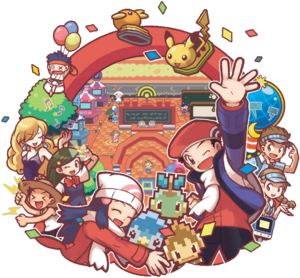 The Wi-Fi Plaza (Japanese: Wi-Fiひろば Wi-Fi Plaza) is an enhancement to the Wi-Fi Club in Pokémon Platinum, HeartGold and SoulSilver found beneath most Pokémon Centers, downstairs in the Pokémon Center basement and a replacement for the Joyful Game Corner found in Pokémon Emerald, FireRed and LeafGreen. Players from around the world can enter a plaza-like area to play mini-games together via Nintendo Wi-Fi. The player can walk around the plaza and communicate with other players in the plaza. The Wi-Fi Plaza uses the DS's touchscreen, allowing interaction when playing games or playing with tap toys to make sounds.

In the Wi-Fi Plaza, there are five different type-based rooms that feature certain Pokémon of that type. One of the five rooms is pre-selected randomly before entering the plaza; these rooms don't affect mini-games and other features, but do provide aesthetic differences such as background color and featured Pokémon. The fire type room has the fire type starters, Water has the water starters, and same with grass. The electric type room has Pikachu, Plusle, Minun and Pachirisu. There is also a rare Mew themed room.