White is the president of a show business company, so that makes her somewhat of an expert on show business. She is shown to do anything for the sake of show business, saving Black from getting arrested all because of his male Tepig which she needed for a commercial they were working on. It is revealed that White has never fought a single Pokémon battle in her life before, as she intends to become a Pokémon Talent agent in the future. 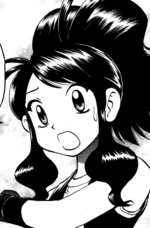 White without her hat.

Just like most manga characters, they are based on the playable characters in each respective game. Though unlike in the game, her hair is shown once, but there is not much difference with or without her hat.

Her first appearance was during the shooting of an Xtransceiver commercial, where she found Black with Tep (a ♂ Tepig) yelling out his dream. She decides to hire him for the Pokémon BW Agency, after hearing she only needed to bring a female Tepig (her Gigi), but then learned she needed both genders. When Black is accused of messing with the commercial, she tries to prove his innocence, because if he were to be arrested, so would Tep. After Black catches Tula, White hires him into the Agency. White shared many adventures with Black such as the battle with N in Accumula Town, the battle against Team Plasma in the Dreamyard and Black's battle against the Timburr. After reuniting with the director in Nacrene City, she was asked by Nimbasa City Mayor to arrange a Musical. White then skips with joy until the dragon fossil is stolen from the museum. She stays with Mr. Hawes until Black and Burgh return with the fossil. She and Black are later attacked by Virizion, estimated by Geoff, President of the Battle Company. She arranges an advertisement for the Castelia Pokemon Massage but is freaked out because might lose her male and female Tepig due to Tep almost evolving. She later sees Black's gym battle but isn't happy when Tep evolves. She later gets over it and travels with Black to Liberty Garden and then Nimbasa. After arranging the first Pokémon musical (which was filled with problems regarding the prop case), White was forcibly taken into the Nimbasa City Ferris wheel by N. He questioned White on her basis for the Pokémon musical and then reprimands her for not listening to her own Gigi's voice, saying that she desired to battle. To further prove this, he sends his Servine to battle it, and much to the surprise of White and content of N, Gigi showed a potential for battling when she used Ember on Servine, with N even commenting that it could even take on the Unova Champion. When they were sufficiently close to the ground, White opened the door of their car, exiting it, but still holding onto it in order to take Gigi with her. However, Gigi decided to remain with N. Surprised by this, White slips and falls on the grass below the ride. After declaring that he will liberate all Pokémon from trainers, N sends his Servine towards the dumbfounded, crying White. She wakes up in the hospital, seeing the Servine that attacked her. She then gets coached by Black on how to catch Pokemon, catching a Deerling with the Servine. She then borrows Black's Brav and goes to train on the Battle Subway. She meets Shauntal on the Subway and defends the train against an attack with Tornadus and Thundurus.