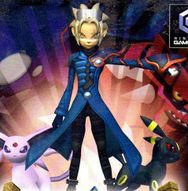 Wes is the main protagonist in Pokemon Colosseum. He was once a member of Team Snagem, but after stealing the Snag Machine and blowing up their base, he turned towards the light.

He is first met at the Stand in the desert with his only two Pokémon, an Espeon and an Umbreon. They travel with him in his sand bike in the passenger car until Wes meets Rui. Wes met Rui in Phenac City, after saving her from Folly and Trudly. She was ultimately surprised when she discovered his past, but doesn't care too much because he is her prince. Rui encourages Wes to open up more as they travel and begin a beautiful friendship. Eventually the two snag and save all the Shadow Pokémon and save Orre from Team Sagem and their plans.

Not much is known about his story after he defeated Team Snagem as he is hardly even mentioned in Pokemon XD: Gale of Darkness, but some think he may have gone off with Rui to live in peace.