"...all right, challenger. It's not often, but some Trainers manage to come and challenge me. But they've all been boring battles. I didn't break a sweat beating them. ...Sigh... I'm Volkner, the Gym Leader. They say I'm the top Gym Leader in Sinnoh, but... Anyway, I guess we'd better get this done. I hope you're the Trainer who'll make me remember how fun it is to battle!"
— Volkner, Pokémon Diamond, Pearl and Platinum.

Volkner (デンジ Denzi / Denji ), serves as the Gym Leader for the Sunyshore City Gym. Volkner specializes in Electric-type Pokémon, and holds the Beacon Badge for the trainers that defeat him. He is the final and most powerful gym leader in Sinnoh.

Volkner was first referred to by Tower Tycoon Palmer in Challenging a Towering Figure!, saying that, after seeing his battling skills, Ash would be able to give Volkner "a shock."

Volkner first appeared in person in Flint Sparks the Fire!. It was revealed in the episode that he had met up with Flint when they were younger and had become rivals and eventually good friends.

A heated rivalry of Volkner and Flint when they were young.
After Volkner became a Gym Leader, he designed the walkways of Sunyshore City and other technological advancements for the city.

He also designed the Sunyshore Tower which supplies electricity to the city. However, he soon became bored with battling and resorted to giving free badges to Trainers. After witnessing Ash's battle with Flint, he became interested in battling again and decided to accept Ash's challenge for a Gym battle.

Volkner
Volkner appeared again in The Fleeing Tower of Sunyshore!, where he and Ash began their Gym battle. However, it was quickly interrupted as Team Rocket stole the Sunyshore Tower, causing a city-wide blackout. After Ash defeated Team Rocket with the help of his newly evolved Torterra, Volkner returned the tower back to its original place. However, as both the tower and Gym were badly damaged, Volkner told Ash that he had to repair them before they could have a rematch.

Volkner smiling
Ash agreed to the terms, saying that he'll spend that time for more training. Ash challenged him once again in The Eighth Wonder of the Sinnoh World! During the last battle between Infernape and Luxray, Infernape's Blaze was activated once again, but now, Infernape was able to take control of its ability, and by using the powers it gained, it won the match. This 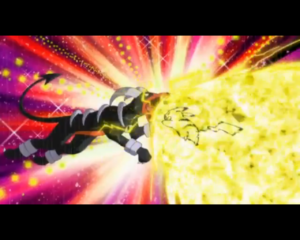 Volkner first appeared in Generation IV's Diamond and Pearl games as the Sunyshore City Gym Leader, specializing in Electric Pokémon. His Gym consists of three rooms filled with gigantic gears, electrical equipment, and rotating walkways. The player would need to rotate the walkways, using buttons located in various areas, and construct a path leading to the next room, and later, to Volkner himself. In the game, just like in the anime he is bored but after battling he will be back to the way he was.

Upon defeating him, Volkner will reward the player with the Beacon Badge and TM57 (Charge Beam).

In a Tag Battle with Flint