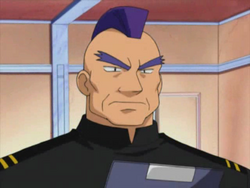 Viper (Japanese: バイパー Viper) is a character in Pokémon Chronicles who appeared in "Training Daze". He is the Drill Sergeant of the Team Rocket Academy. He trains new recruits for Team Rocket. His English voice actor is Mike Pollock and his Japanese voice actor is 加藤精三 Seizo Katō.