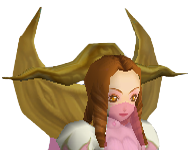 Venus is a Cipher Admin in Pokémon Colosseum. She controlled The Under and gave out Shadow Pokémon as prizes to people who won at the The Under Colosseum. When Wes and Rui first come to town, Venus makes a T.V. appearance saying that there are spies in The Under and tells everyone to catch them. Wes and Rui soon discover that she works for Cipher and invade her T.V. studio using the R-disk on the UFO and go to the T.V studio to battle her, capturing her Shadow Suicine and defeating her on live T.V. Venus then escapes to the Shadow Pokémon Lab and the player doesn't see her again until he/she go to the Relgam Tower and the Deep Colosseum.