Veilstone City (Japanese: トバリシティ Tobari City) is located in eastern part of Sinnoh. Trainers who beat the city's Gym (a Fighting-type Gym) are awarded the Cobble Badge. Also located in Veilstone City is the Game Corner and the Veilstone Departmant Store. This quaint city also includes a Pokémon Center, Team Galactic's HQ, the Galactic Warehouse, Meteorites that will change the form of Deoxys, and the Prize Exchange. The prizes include Silk Scarf, Wide Lens, Zoom Lens, Metronome, and the TM68 and more TMs.

The road to get to the Gym Leader is not direct. There are several moving walls you can push, and you have to push until the road is open to reach the Gym Leader. 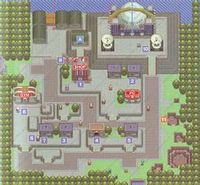