Victory Road is the final hurdle before taking on the challenge of the Unova Pokémon League. It's a maze of caves, and requires the player to slide down the cliff face to explore every section before ultimately overcoming the trial. The seven-level dungeon is notorious for attracting formidable opponents, who flock here to test their skills before challenging the Elite Four. Care should be taken as there is nobody to heal the player's team until the fourth floor, where one Doctor awaits battle and will heal the player's party. If the player has to leave here before reaching the exit then they can simply return by Flying.

Once the Musketeer trio is accessed, the player can find another one of the Musketeer Pokémon, Terrakion, here on the sixth floor in an area known as the Trial Chamber.

In Pokemon Black 2 and White 2, Victory Road experiences a landslide and cave in, causing the Badge Check Gates to be moved to Route 23. Whats left of Victory Road is the topmost room and the top ledge. The staircase has been blocked and a opened path leads to the other side of Victory Road in BW2. The topmost ledge leads to the Pokemon League. The slope has been blocked while the cliff is deformed. Fissures can be seen on the slope while rocks have crumbled on the side. As a result, Terrakion has moved to Route 22.

After finishing the main story, if you speak to Cheren on Route 5, you can then battle him here once per day. He'll be waiting on the seventh floor. 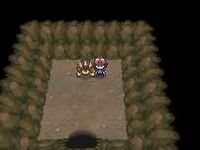 Standing beside Terrakion in the chamber.

Trial Chamber is a location in Unova. Located in Victory Road, on the left path toward the end is the location of Terrakion. The player must capture Cobalion before the seal to Terrakion is opened.