Route 4 is a desert road linking Castelia City to Nimbasa City, with the entrance to the Desert Resort located in the northwest. Despite being a desert route, a small beach is in the southwest. There's an overhanging bridge in the north side where you'll see trucks passing. Due to the constant sandstorms, construction work is still ongoing and the route is incomplete. Many Workers are scattered around waiting for a battle to pass the time. 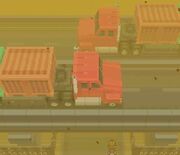 On your first visit you'll find Cheren waiting to battle you. After defeating him, Professor Juniper calls both of you through the Xtransceiver and meets you at the gateway to Nimbasa City, where she gives you ten Ultra Balls.