Route 18 is in south eastern Unova, only accessible by surfing through Route 17's rapids. The main part of the route is taken up by a hilly island in the west. Some researchers believe that it once bordered the Desert Resort.

On the center of the island is a house where your Pokémon can be healed if needed. Also in the house is a treasure hunter who will give you a Larvesta egg; and a man who buys Rare Bones, which the wild Dwebble in the area occasionally hold. 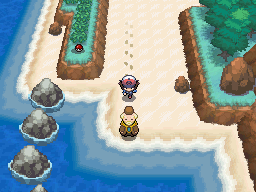 Rood is found on the island after beating the game.

One possible reason why you can find Pokemon from Route 4 and Desert Resort (Scraggy, Dwebble) in Route 18 is because it was once connected to the Desert Resort. It is unknown how this is possible as the sea and Castellia City would be in the way.