Unova's Pokémon League is a Romanesque, temple-like structure located at the end of Victory Road. Competing here is the ultimate goal for Trainers in the region. Only those who manage the grueling task of collecting eight Gym Badges qualify to take on the challenge of battling against the Elite Four, a powerful group of Trainers renowned as the best in Unova.

There is a sparse Pokémon Center in the entrance, only equipped with basic facilities; giving you the opportunity to heal your team and purchase any necessary items. Stocking up on items is highly recommended; there are four or five battles in a row, with no chance of running back to the Pokémon Center if needed.

A man stands guard at the entrance to the main building, and asks if you're willing to continue after explaining the rules. Saying yes will allow you to enter the plaza; a hub with four stairwells, a statue in the center and four circles marked on the ground. When you enter the plaza, a gate will spring up and close off the exit. The only option is to continue up one of the four curved stairways; lower-left will take you to Shauntal, the Ghost-type master; top-left leads you to Grimsley, the Dark-type expert; lower-right takes you to Marshal, a Fighting-type buff; and the top-right leads you to Caitlin, who specializes in Psychic-types. 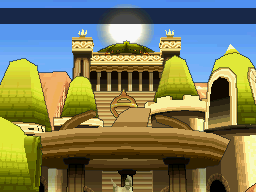 The entrance, as seen when you enter from Victory Road. 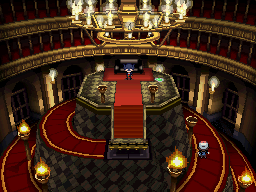 After defeating each one, the corresponding circle on the plaza floor will light up; when you've defeated all four, all circles will be lit and checking the now glowing statue in the center of the room will take you to a lengthy set of stairs, which lead to the Champion's Room at the summit.

The first time you make this journey, you'll witness the ending of Alder and N's battle, resulting in Alder's defeat. Having set his beliefs on the line, and hoping the bond he shared with his Pokémon would help him prevail, Alder is devastated and begs N not to continue with his plans of separating people and Pokémon. However, N shows no pity and refuses to listen. Realizing that you're present, N turns to you and seems to be happy that you've obtained the Dark/Light Stone. He announces that the Champion's Room is no place for a Legendary Pokémon and, at his words, a giant castle rises out of the ground, surrounding the Pokémon League.

Multiple stairways appear from the new building and latch onto the Pokémon League, with one stairway smashing through the Champion's Room, blocking the Hall of Fame, but allowing access to N's Castle. N dashes up the stairs, stating that he wishes you to follow.

Shortly after N disappears inside the castle, Cheren shows up, having beaten the Elite Four. He finally knows why he wants to be strong and tells Alder as much. However, Alder remains shaken and Cheren stays behind to look after him, whilst you climb the stairway to confront N and halt Team Plasma's misguided plans.

After seeing the credits roll for the first time, you'll able to come back here to be enshrined in the Hall of Fame. The Elite Four have stronger Pokémon and you can take on the true Champion, Alder, at last.