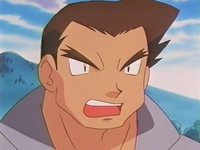 Somewhat coarse, but not overly rude. A reserved opportunist, he grabs the three most useless agents he can find (Jessie, James, and Meowth, of course) and tricks them into the most dangerous job by giving them free food. He also has a thing for making bad jokes off and on. He was arrested along with some other Rocket Grunts in the ending of Rage Of Innocence.