From the Azurilland Wiki, a database for the Pokémon series that anyone can contribute to
Jump to: navigation, search
← Deoxys | Turtwig | Grotle →

Turtwig (Japanese: ナエトル Naetoru) is the Grass-type Starter Pokémon of the Sinnoh region. Made from soil, its shell on its back hardens when it drinks water. It lives near lakes. 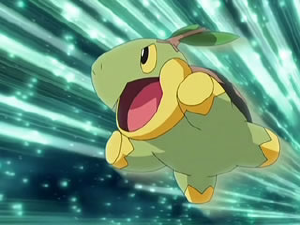 Turtwig is used by Ash in the Sinnoh Region. It could learn Tackle, Withdraw, Absorb, Razor Leaf, Curse, Bite, Mega Drain, Leech Seed, Synthesis, Crunch, Giga Drain, and Leaf Storm. Later in the series, Ash's Turtwig evolved into Grotle, but this made it hard for Ash to train it, due to a lack of speed. Afterwards, Paul's Torterra teaches Grotle how to fight with reduced speed. Ash later uses this strategy there on. It soon evolves into Torterra at Sunyshore City during another battle with Team Rocket.

Turtwig with Pikachu in anime.

It is set to reappear in the Pikachu short airing along with the 15th Pokemon movie.