From the Azurilland Wiki, a database for the Pokémon series that anyone can contribute to
Jump to: navigation, search
← Dusclops | Tropius | Chimecho →

Tropius have the appearance of a sauropod dinosaur with giant leaves covering parts of their body. Four of these leaves, located on its back, are used for flight. Even though they appear to be slow-moving, Tropius can be quite maneuverable during flight. They have long necks which they use for eating off of trees. There is a leaf-like covering on the top of its head that gives it the appearance that it is wearing a helmet. Tropius also grow bananas on their neck, showing that they are much like a tree.

Tropius does not evolve. 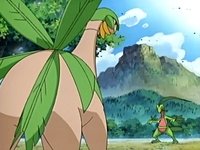 Tropius about to battle Ash's Grovyle

Tropius had a large part in the episode From Brags to Riches. It was used against Ash during the second round in the Hoenn League. Tropius' attack SolarBeam against Ash's Torkoal's Overheat resulted in a double knockout.

In the episode Odd Pokémon Out a Tropius challenged Ash's Grovyle to a duel. The two Pokémon were in love with a Meganium which resulted in a battle.