Trip's Serperior is one of Trip's Pokémon. This Pokémon was Trip's starter Pokémon in Unova.

Serperior first appeared, as a Snivy, in BW001: The Shadow of Zekrom!, as one of Professor Juniper's starters to be distributed to the beginner trainers in Unova. Now belonging to Trip , Snivy battled Ash's Pikachu and won due to Pikachu being unable to use any electric attacks. 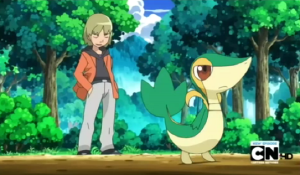 Trip and Serperior when it was a Snivy

He appeared again in BW010: A Rival Battle for Club Champ! during Trip's second battle with Ash, where it was revealed to have evolved into a Servine. He battled Pikachu and easily defeated him with a Cut attack, before losing to Ash's Snivy after being hit by Attract.

In BW034: Ash and Trip's Third Battle! Servine battled Snivy again during Ash and Trip's third battle. Using Leaf Tornado he managed to block Snivy's Attract before defeating her with a powerful Cut.

In BW092: Jostling for the Junior Cup!, it is revealed that Servine has evolved into Serperior and that he will compete in the World Tournament Junior Cup and his first opponent was Burgundy and her Darmanitan. Serperior was quickly able to knock out Darmanitan with a Leer and Solar Beam combination in only one turn.