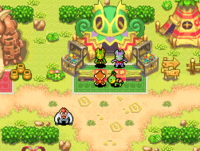 "These shops are run by the Kecleon brothers. The older Kecleon sells Berries, Seeds, and similar items at his Kecleon Shop. The younger Kecleon brother deals in TMs and so on at Kecleon Wares. The merchandise selection will change as you progress through the story."

A bank run by Duskull. A bank also appeared in Pokémon Mystery Dungeon: Red Rescue Team & Blue Rescue Team but was run by Persian. It allows the player to save money so none in lost in the event of defeat.

"A bank operated by Duskull. You can deposit or withdraw your Poké (money) here. You should deposit your money here for safe keeping before going exploring. If you are defeated in a dungeon, you lose all the money you are carrying, but what's in the bank is safe."

"You can store or take out items here. It's a good idea to store important items before going out on a risky exploration, because if you are defeated in a dungeon, you lose some of the items you are carrying."

A shop run by Electivire that allows the player to link two attacks together so you can hit the opponent with two attacks instead of one. You can also re-learn old moves here. A Link Shop appeared in Pokemon Mystery Dungeon: Red Rescue Team & Blue Rescue Team but was run by Gulpin.

"A facility for linking moves and recalling forgotten moves. Linking is a process of putting two moves together so that they are used one after another in one turn. At this shop, the "Link" command links the selected move with the move listed below it. The order of the moves on the list can be switched around using the R button and the ✚ Control Pad together. Linked moves are used in the order that they are listed. If you want to break the link, select the linked moves and select the "Delink." Note: some moves can't be linked." 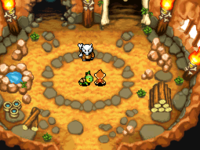 A dojo where you can train at. After defeating Primal Dialga, the Final Maze, the toughest maze of them all, is unlocked 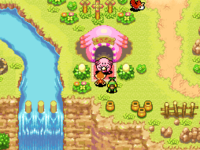 A day care run by Chansey usable when you are given an Egg for completing a mission. Once you recieve the Egg, you take it to Chansey's Hut for Chansey to incubate the Egg. After a few in-game days, the egg will hatch.

"A shop that takes care of Eggs you obtain as thanks for completing jobs. If you get and egg, be sure to bring it here and leave it with Chansey. A Pokémon will hatch several days later." 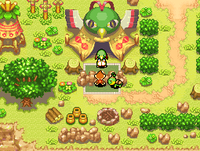 If you bring a box found in a mystery dungeon (ex. Heavy Box, Shiny Box) to Xatu Appraisal, the owner Xatu will open the box for a small fee. A variety of items can be obtained from boxes, like seeds or TMs.