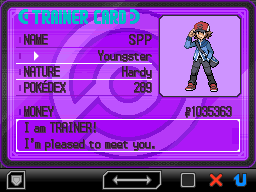 A trainer card in Pokémon Black and White

A Trainer Card is a small simple card that gives information on the Pokémon Trainer it belongs to. In the most recent game versions, the Trainer Card has the player's ID number, name, money owned, how many Pokémon seen, score, length of gameplay, sprite, and whether or not one has beaten the Elite Four. On the back, it has the date and time of one's Hall of Fame debut, the number of times you have linked with another game, the results of your link battles, how many linked trades one has battled, and one's signature.

Starting from Generation IV, the player can change their trainer cards' color based on achievements.