From the Azurilland Wiki, a database for the Pokémon series that anyone can contribute to
Jump to: navigation, search
← Croagunk | Toxicroak | Carnivine →

Toxicroak (Japanese: ドクロッグ Dokurog) is a Poison/Fighting-type Pokémon introduced in Generation IV. Its two types make it twice as vulnerable to Psychic-type moves. Toxicroak appears as a boss in Pokémon Ranger: Shadows of Almia.

Toxicroak has a blue body with one long black line crossing over its mouth, around its eyes, and connecting to the arms and legs. On its hands are three fingers and a red claw used for Poison Jab. 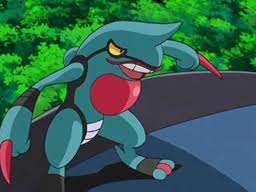 Toxicroak belongs to Saturn, a Team Galactic Commander. Toxicroak has been seen making scary faces with Brock's Croagunk, making this part of the Anime a comical sight.

Toxicroak is the evolved form of Croagunk as of level 37.

Toxicroak's design is based on a poison dart frog.

Toxicroak's name comes from the words "Toxic" and "Croak".