From the Azurilland Wiki, a database for the Pokémon series that anyone can contribute to
Jump to: navigation, search
← Grotle | Torterra | Chimchar →

Torterra is the Grass/Ground-type Starter Pokémon of the Sinnoh region, evolved from Grotle and Turtwig. Its first appearance in the anime was when Paul, Ash's new rival in Sinnoh region, used one. Usually, a Torterra in the wild has up to a few Pokémon living in the tree on its back; generally small, pre-evolved Pokémon.

Torterra is a huge, four-legged turtle Pokémon. It is mainly gray, green, and brown. Its most noticeable feature is that there is a tree and three spike-like rocks on its back, which gave the 'Terra' part of its name, meaning 'earth' in Latin. It has two silver spikes on either side of its huge head.

Torterra is probably named from "Tortoise" and Terra, which means earth in Latin. 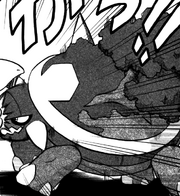 Torterra in the Pokémon Adventures Manga.

In the Pokémon adventures manga, Dia owns a Torterra.