From the Azurilland Wiki, a database for the Pokémon series that anyone can contribute to
Jump to: navigation, search
← Igglybuff | Togepi | Togetic →

Togepi (Japanese: トゲピー Togepii) is a Fairy-type Pokémon introduced in Generation II. Prior to Generation VI, it was a pure Normal-type Pokémon. It evolves into Togetic at max friendship.

It is most famous for being the first of the second generation Pokémon to be known, although Ash did see a Ho-Oh in the first episode but it wasn't named. Most Togepi are hatched from a Pokémon Egg. In some games (Pokémon Platinum and HeartGold for example) you will recieve an egg and a Togepi will come out, and in Diamond and Pearl, they can be found in the wild after you recieve the National Pokédex.

Togepi evolves into Togetic when leveled up with max friendship. 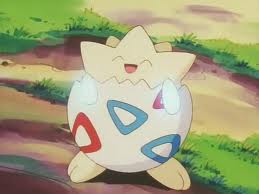 Togepi in the anime

In IL046: Attack of the Prehistoric Pokémon in the Pokémon television series, Ash discovers an egg in the ancient ruins at Grandpa Canyon. They carry this egg around until the episode IL050: Who Gets to Keep Togepi?. At that point Ash's Pokédex doesn't know about Togepi and it says more to be discovered about it.

Main article: DP142: Where No Togepi Has Gone Before!

In the episode "Where No Togepi Has Gone Before!" an evil (or a "Naughty") female Togepi wanders around Team Rocket's new hideout and cause a lot of mischief for Team Rocket and Ash, Dawn, and Brock. It plays pranks, using Attract to manipulate Pikachu, Piplup, Croagunk, and Meowth (Jessie's Yanmega is unaffected due to it being female) to steal Team Rocket's space rocket. Brock's Happiny manages to snap them of it. Happiny and Togepi get ready to duel each other when the rocket is hit by Rayquaza's Hyper Beam. Ash, Dawn, Brock, Team Rocket, and their Pokémon work together to stablize the rocket, but Happiny and Togepi's fight causes it to fall again. Togepi uses Psychic to save itself as well as everyone onboard, landing the rocket safely. Togepi tells the others (via Meowth translating for it) that it is tired and is going home to rest. The Togepi leaves as the rocket explodes, skipping away innocently. It is seen at the end of the episode making its sinister face.

It is set to reappear in the Pikachu short airing along with the 15th Pokemon movie. It is possibly the Togepi in it's cute form in Unova.

Togepi's movepool is rather limited, making it difficult to train. It is not considered to be a very strong, competitive Pokémon, and is mostly adored due to its appearance. It will evolve into Togetic once it reaches maximum happiness. Togepi appears from the Poké Ball item in Super Smash Bros. Melee. Like Clefairy, Togepi uses Metronome, but unlike Clefairy, the resultant attacks cause status effects in the area around Togepi (Freeze, Burying, Flower on Head, Sleep), with the exception of one rare attack, where Togepi blackens out the screen for a few seconds (Night Shade) which can cause mass chaos, especially on moving levels or boss fights. It is also an unlockable trophy.

In the TCG[edit | edit source]

Although being a classified as baby Pokémon Togepi has made appearances as a colorless, basic stage stage Pokémon. Togepi has appeared in the following expansions:

As well as being a promo card in the Southern Island Series, Togepi was also available as a promo card from Coro Coro.

Togepi's name is derived from the Japanese "toge", meaning "spike" (referring to the top of this Pokémon's head), and "pii", the sound a chick or small bird makes.