From the Azurilland Wiki, a database for the Pokémon series that anyone can contribute to
Jump to: navigation, search
← Magmortar | Togekiss | Yanmega →

Togekiss (Japanese: トゲキッス Togekissu) is a dual type Fairy/Flying Pokémon. Prior to Generation VI, it was a Normal/flying-type. It is the final evolution of Togepi. 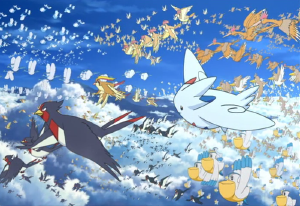 Togekiss in the Anime

Togekiss makes a cameo appearance at the beginning of the movie, Giratina and the Sky Warrior. Later in the series, Dawn is given one for helping a Princess to be in a Pokémon contest.

It resembles a moderately sized bird covered with white down. It has a crest similar to its earlier forms Togepi and Togetic, with blue and red feathers. There are two feet that are close to each other. Along its chest are spots that resemble small red and blue triangles like those of its pre-evolutions. Its overall shape resembles that of a flying wing aircraft. 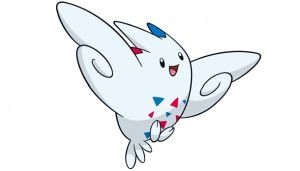 Togekiss evolves from Togetic by using a Shiny Stone. It is also the final form of the egg Pokémon, Togepi.