From the Azurilland Wiki, a database for the Pokémon series that anyone can contribute to
(Redirected from Todd)
Jump to: navigation, search 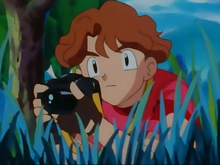 Todd Snap (Japanese: トオル Tōru), is a professional Pokémon photographer. He is one of the few major characters in the Pokémon franchise who has no Pokémon of his own.

He has two separate names in the English-language dub. When Pokémon.com announced that his episodes would air on Toonami Jetstream to celebrate the release of Pokémon Snap on Virtual Console. Wich this received a retcon by making Snap his surname.

When Ash, Brock, and Misty first met Todd they called him Snap.

He is a good friend of Ash, Misty, and Brock.