From the Azurilland Wiki, a database for the Pokémon series that anyone can contribute to
Jump to: navigation, search
← Audino | Timburr | Gurdurr →

Timburr (Japanese: ドッコラ Dokkora) is a Fighting-type Pokémon introduced in Generation V that is the pre-evolved form of Gurdurr and Conkeldurr. Its body has vein-like formations on its head and torso, possibly indicating that it is a very strong Pokémon. It gets stronger throughout it's evolutions.

Timburr is a small Pokémon. It is mainly khaki in coloring and has a rectangular log with it. It has small pink areas over its body to suggest bulging veins, which strong characters carry. In battle, it carries a log with both hands on its back. Occasionally, Timburr will do flips with the log during the animation. 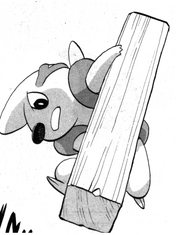 Timburr in the Pokémon Adventures Manga.

Timburr evolves into Gurdurr at level 25, and then into Conkeldurr through trade.