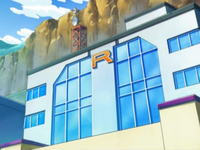 The Team Rocket Academy is an anime-only location likely in Kanto. It was featured in Pokémon Chronicles which appeared in Training Daze. The academy is place where people to become members of Team Rocket. The training and develop skills such as stealthy stealing, tracking and capturing Pokémon. The campus is a large building containing rooms, shower rooms, bedrooms, and a nursery. The head of the Team Rocket Academy is Giovanni, while the Drill Sergeant is Viper.