Team Rocket (ロケット団 Rocket-Dan) is a criminal organization, with their main base in the Kanto Region, and the Johto region with branches in the Orange Islands (in the anime), and Sevii Islands. They are headed by Giovanni, who also doubles as the Viridian City Gym Leader. 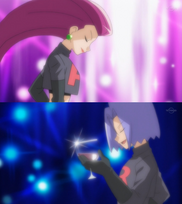 Team Rocket, in the anime, have a Base of Operations in Kanto and are headed by Giovanni. Their headquarters were once located in between Pallet Town and Viridian City but has since been destroyed. It is now in an unknown location inside of a large canyon. Team Rocket has also been shown to have branches in the Johto Region and other areas in Kanto.

Featured more often then the Team as a whole are Jessie, James and Meowth. These three are a small group of members that follow around Pokémon Trainer Ash Ketchum. They were first shown in the episode Pokémon Emergency! in an attempt to steal Pokémon from the Viridian City Pokémon Center, and were defeated by Ash. Ever since then, they have mainly focused their attention on Ash in hopes of stealing his Pikachu. However they always fail and are always defeated hundreds of times with them blasting off into the sky. The trio's persistence has led them to every region Ash has been to including Kanto, Johto, Hoenn, Sinnoh and currently the Unova Region. Since Ash started going to regions where Team Rocket branches are not located, they also double as founders of new branches in the region, although according to Cassidy , this is just a plot to keep them away so that they won't ruin Giovanni's plans. So far they attempted (but failed) to form new Team Rocket branches in the Orange Islands, Hoenn, and Sinnoh.

Jessie, James, and Meowth are generally considered failures, as they almost are never successful in their schemes and are incompetent. Giovanni regularly refers to them as "a bumbling trio" and never wants them around his big plans as they "can't do anything right". He thinks that this trio is so incompetent that he even considered firing them but he does not because of member shortage. Despite this fact they always strive to please their boss, and are very persistent in doing so.

In the 14th season (Black and White), they received a promotion to advanced agents after they make a contribution to disbanding Team Galactic by helping Detective Looker sneak into Team Galactic headquarters and Mount Coronet. However they took all the credit to their boss, lying about single-handedly defeating Team Galactic and Pokemon Hunter J, and they no longer serve as comic relief and have become more of a serious enemy. With their promotion, they received the official Team Rocket Grunt black uniforms, but they later changed back into to their original, white uniforms in BW025. So far they have never "blasted off" in the Unova region. The trio have gained impressive athletic, hacking and infiltration abilities since arriving in their promotion and have made capturing Pikachu less of a concern, instead focusing on major Team Rocket plans that will ultimately lead to conquest of Unova and the entire planet.

The following are members of Team Rocket. (Members with an asterisk to the side of their name means they are part of the manga).

Besides Giovanni, Jessie, James, and Meowth there have also been other Team Rocket members featured multiple times or having large roles. Another duo is Butch and Cassidy, who have been in multiple episodes and are the rivals of Jessie and James. Along with them is Attila and Hun who pursue Jimmy as Jessie and James pursue Ash. There are also non field agents that work as scientists such as Dr. Namba and Professor Sebastion. There have only been a small number of Team Rocket Officers shown but such officers include Domino and Vicious. These high-ranking officers work solo and are considered the best in Team Rocket.

Team Rocket has appeared in various games including the Generation I, Generation II, and Generation III's FireRed and LeafGreen games. In Pokémon Yellow, Team Rocket's Jessie and James also appear in several locations and battle the player.

Team Rocket in the original, FireRed and LeafGreen games appear throughout the game. They first appear in Mt. Moon and then are conducting their plans in Saffron City, the Game Corner in Celadon City and the Pokémon Tower. Their Leader is Giovanni which whom the player battles with on a couple of occasions and then finally in the Viridian City Gym, since he is the Gym Leader.

In the FireRed and LeafGreen versions, they also appear in the Sevii Islands. A pair of them appear in Mt. Ember where they search for the Ruby and in Icefall Cave where they are fought off with Lorelei's help. After a scientist retrieves the Sapphire from the dotted hole, the player can access their warehouse on Five Island and defeat the Grunts, Admins and the Scientist to get it back.

They return to Johto three years later. In Azalea Town, they threaten to cut off Slowpoke's tails and sells them. When the player reaches the Lake of Rage he/she will discover that Team Rocket was behind the Red Gyarados incident, and will join forces with Lance in an attempt to pull the plug. Team Rocket is eventually defeated, and in a last resort they take over the radio tower and hope to contact Giovanni, but are once again stopped. They are disbanded the last time.