From the Azurilland Wiki, a database for the Pokémon series that anyone can contribute to
Jump to: navigation, search
← Marshtomp | Swampert | Poochyena →

Swampert's appearance is inspired from the real world mudskipper. It has a long blue body with a lighter blue underbelly. It has four appendages that are a cross between legs and fins. With these, it sometimes stands upright on its hind legs, and at other times is on all fours like a quadrupedal animal. Each has an orange oval on it. Swampert has large, fan-shaped fins above its eyes and a huge axe-like fin growing out of its behind as a prosaic tail would. It also has a pair of orange gills on either side of its face. It also has very small orange eyes. 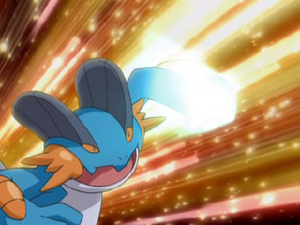 Swampert is a diurnal Pokémon with an affinity to water. Thus it lives and makes its nest offshore on various beaches. It has various abilities that allow it to live without fear of being targeted as prey. Its three fins sense subtle changes in the sounds and patterns of ocean waves and tidal winds to predict the oncoming of storms and tidal waves, respectively. Its great strength, allowing it to procure and drag boulders that can weigh a ton, lets it pile up boulders around its beach nest in order to weather the storms that it may predict. Of course, with its strength and its rock-hard arms, it can easily batter down a foe with a single swing.

Other talents include its powerful vision, able to see through even the depths of murky water, allowing Swampert to live in a swamp or marshland environment, and its amazing swimming ability, making it faster in water than a jet ski. Its speed is comparable to the Pokémon Poliwrath.

Swampert has great attack and Hit Points with quite nice Defense to compliment that, and is extremely versatile due to its typing. However, Swampert's special attack is a little lower, making many believe that it should not be used for attacking with special moves, and its speed is decidedly low. Its Water/Ground-type combination protects it from Electric-type Pokémon, which are usually a pain against Water-type Pokémon, but it also makes it 4x weak to Grass-type attacks. It can learn Ice Beam and Avalanche, which may help to counter this vulnerability. Swampert is usually used in physical offense, with the powerful Ground-type Earthquake attack as a staple in almost all of its movesets. Swampert's excellent defense also make it a good Roarer. Swampert is one of the most feared Pokémon in the metagame that trainers are willing to teach their Pokémon Grass-type moves just to counter it. Due to its invunerablity to electricity and ablity to learn a whole range of moves to counter foes, a Swampert can also be used as a powerhouse in one's party as well as a tank.

In the anime, Swampert was voiced by Scottie Ray in the 4Kids Entertainment dub.

Swampert is the final evolution of the Hoenn Starter Pokémon Mudkip. It evolves from Marshtomp at level 36.

Swampert is playable in Mystery Dungeon games by evolveing Marshstomp. But much like Lucario, He has no role in the main story at all.

This Pokémon's name comes from swamp, a place where many Water/Ground-type Pokémon would likely be found, and rampart, meaning a fortification, which probably refers to its habit of piling up boulders to protect itself. It could also come from the word expert, as it is very capable in a swamplike area.