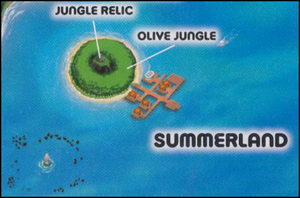 Summerland is a town that is on the shore of a tropical beach. The town is known for its warm and hot weather and is named after the season of Summer. It is on an island located in the Safra Sea.

Summerland is known best for its tropical beach and the Olive Jungle, which is north of the village. The Olive Jungle contains many Bug and Grass-type Pokémon and is a tourist hot-spot. Deep within the rainforest is the Jungle Relic which was a place where Pokémon Rangers could test their skills and capture the 4 Dragon-type Pokémon, but if they were caught, disaster would occur within the relic. The port of the town has many ships and a Lapras that can be used to go to Fall City or you can head out into the Safra Sea and do a Pokémon capture test similar to Ringtown's Grassland Challenge.