From the Azurilland Wiki, a database for the Pokémon series that anyone can contribute to
Jump to: navigation, search
← Charizard | Squirtle | Wartortle →

Squirtle (pronunciation: SKWUR-tl) is a Water-type Starter Pokémon of the Kanto region.

Squirtle is a small, light-blue Pokémon with an appearance similar to that of a turtle. Like turtles, Squirtle has a shell that covers its body with holes that allow its limbs, tail, and head to be exposed. Unlike a turtle, Squirtle is ordinarily bipedal. Squirtle is seen in the WiiWare games Pokémon Rumble and My Pokémon Ranch.

Squirtle has the ability Torrent, which boosts the power of its water type attacks by 150%, if its health drops to 33% or below.

Squirtle also has the natural ability to shoot water from its mouth, which is where the bulk of its attacks comes from.

Squirtle evolves into Wartortle at level 16 and again at level 36 into Blastoise.

Ash Ketchum owns a Squirtle, which he obtained in the episode Here Comes the Squirtle Squad. The Squirtle Squad was a group of Squirtle that were causing a number of disruptions in a small town. It wasn't until Ash arrived that they turned from doing bad to doing good, by becoming a firefighting squad. The leader then joined Ash, then much later returned to the squad and is currently where it is located. It does come back every now and then, to help Ash in a battle. Additionally, as revealed in the first episode, Ash wanted to have a Squirtle as his starter Pokémon.

May gets a Squirtle on The Place at the Right Mime. While in Pallet Town, the baby Squirtle became attached to May and Professor Oak let her keep it. 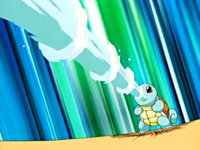 It was revealed in the episode The Ties That Bind that Gary Oak chose Squirtle as his starter Pokémon, as he had a fully evolved Blastoise.

Professor Oak is seen with other Squirtles in Journey to the Starting Line! and A Six Pack Attack.

Squirtle is a starter option in Pokémon Red and Blue, Pokémon Green, and, more recently, Pokémon FireRed and LeafGreen. A Squirtle can also be received as a gift in Pokémon Yellow.

In Super Smash Bros. Brawl, it is playable as part of Pokémon Trainer's team and its moves are Hydro Pump, Withdraw, Water Gun and Waterfall.