Solidad (Japanese:サオリ Saori) is a Pokémon Coordinator who first appeared in "May, We Harley Drew'd Ya!". She maintains a relationship of rivalry with May of the Hoenn Region as well as Drew and Harley. 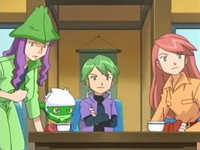 Solidad with Drew and Harley

Solidad first appears in the episode of the ninth season against May, We Harley Drew'd Ya!.

After seeing the great ability and talent of May, she wanted to battle her, and succeeded to the finals of the Kanto Grand Festival. Solidad beat May using a Dodge and counter attack Strategy in the finals and won the Ribbon Cup. Solidad went to the Johto region with Drew, Harley and, of course, May.

Solidad and Brock were previously known to live in the same city but the nature of their relationship is not revealed. However, she treats him and Harley like friends. She is cool, calm and collected making her a top and powerful coordinator.