From the Azurilland Wiki, a database for the Pokémon series that anyone can contribute to
Jump to: navigation, search
Skyla (Japanese: フウロ Fuuro) is the Gym Leader of Mistralton City's gym in the Unova region. Her gym is the sixth gym to be challenged by the player. Skyla specializes in using Flying-type Pokémon. She will award the player the Jet Badge if you defeat her. She first appeared in Pokémon Black and White. When she's not Gym Battling, she spends her free time flying around since she's a pilot.

She first appears in Mistralton City, but she leaves and goes to the Celestial Tower. After you reach the top of the tower and ring the bell, she will return to the Gym for you to battle. After you defeat her, you can continue the game.

After you defeat the Elite Four and you enter N's Castle, she along with the rest of the Gym Leaders will show up and battle the Seven Sages.

For the rest of the game she is found in her Gym. She also visits Cynthia in Undella Town. 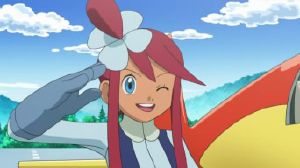 Skyla made her debut in BW069 where she just gave away badges to only trainers who she predicts she will lose to and skip the battles because she always thinks about how the battles will go. And she was also too busy with air shows than Pokémon battles. This made Ash and Cilan mad and as a result, Cilan challenged her to a Gym Leader Battle in which he lost. Ash battles her in BW070 and though she had him on the ropes with her Swanna, it was eventually beaten by Ash's newly evolved Unfezant. After which she was taught not to take Gym Battles too lightly and be a proper Gym Leader. She also informs Ash the next Gym is in Iccirus City.