From the Azurilland Wiki, a database for the Pokémon series that anyone can contribute to
Jump to: navigation, search
← Nosepass | Skitty | Delcatty →

Skitty is a pink, cat-like Pokémon with a big pouch as a tail. it is known of having the trait of chasing its own tail. It has large pink ears and small eyes. 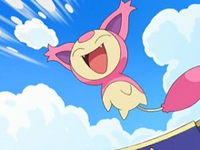 It has the ability Cute Charm, which has a 30% chance of inflicting an Attract condition on foes using a direct attack on the Pokémon. In generation IV skitty can also have the ability Normalize, which makes all moves skitty uses the normal type.

May caught a Skitty as her third Pokémon.

Skitty evolves into Delcatty only by use of a Moon Stone.

Skitty is a starter Pokémon in the game, which can be get by getting the hasty nature in the female gender. Unlike other starter Pokémon which can be chosen as a partner, Skitty is only playable by taking the personality test, or after beating the game. It can also be recruited in the Joyous Tower around 8-10F.

The Pokémon Skitty can be found at Route 222 with the use of a Poké Radar.