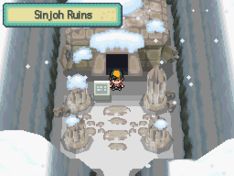 The Sinjoh Ruins is an event-only area located to the north of the Johto Region, bearing features similar to that of both Sinnoh and Johto lifestyles, hence the name. This location is home to an area known as the Mystri Stage, which can resurrect one of the legendary trio if Arceus is brought forth. Cynthia, the Sinnoh Champion, is temporarily living there, and comments that it brings back memories of her hometown, Sinnoh. She directs you to the Mystri Stage, and with it, she instructs you to choose one of the three possibilities.

The only known way to the Sinjoh Ruins is by way bringing an Arceus from a Nintendo event or the Hall of Origin to the Ruins of Alph. If the Arceus is currently the player's partner Pokémon, the lead archaeologist will come across it and ask the player to enter the ruins to unlock a secret. After some waiting, the screen will turn black and both the player and Arceus will be teleported to the Sinjoh Ruins. In a nearby cabin outside the snowbound ruins, Cynthia will be found waiting for the player, and will tell them that she feels that something is going to happen at the Mystri Stage (Japanese: みつぶたい Triad Stage).

Cynthia will escort the player back into the ruins and show them the stage, which is linked to Arceus's power of creation. The player will get a choice to obtain only one of either Dialga, Palkia, or Giratina at level 1, equipped with their respective orbs. Arceus must be the only Pokémon in the player's party for this to occur, and a PC is inside the cabin near the ruins for the player to use to deposit all others. Once the player chooses one of three circles, a swarm of Unown will surround Arceus, and a sequence will follow whereby Arceus will create an egg of the desired legendary Pokémon. As the event ends, the player and Arceus will be teleported back to the Ruins of Alph, where the archaeologist will observe that the nature of the Unown and Arceus' connection is yet another unsolved mystery.

It has been found that if you have both a TRU/Michina Arceus and a Hall of Origin Arceus, and you go down into the room where you teleported you can repeat the event. You can only use an Arceus that hasn't participated in the event. Arceus from Action Replay will not work henceforth since its not the real one from the movie or event.