From the Azurilland Wiki, a database for the Pokémon series that anyone can contribute to
(Redirected from Silver (Manga))
Jump to: navigation, search

"I don't know what my father intends to do about Team Rocket or about me, but... whatever happens from here on, my heart is already set. I'm going to live on without running away from the fact that Giovanni's my father...I won't let my father commit another crime...and for all the wrongdoings that he's responsible for... I will share the burden with him. I'll keep going and work hard to atone for his crimes..."
— Silver in Pokémon Adventures: Volume 26

Silver is the sixth main character from the Pokémon Adventures manga series. Viridian City is his hometown. Silver was born on the 24th December, and his bloodtype is AB. Giovanni is his father.

Silver is based on the game rival character from Gold/Silver/Crystal and HeartGold/SoulSilver.

Silver's special skill, as described by Professor Oak, is Pokémon trading and is known as the "Exchanger".

Despite Feraligatr being his Starter Pokémon, like the trend of every other manga character he had a different Pokémon as his first Pokémon. (Sneasel in this case) As a child, he was kidnapped and raised by the evil Mask of Ice, where he met and became close with Green (Blue in Japan). Together they escaped, and Silver went to Johto, where he later stole Professor Elm's Totodile and Pokédex. This is similar to the way Green stole Professor Oak's Squirtle upon her return to Kanto.

As revealed in the FireRed & LeafGreen Chapter, Silver is the son of Team Rocket's boss, Giovanni. As a young child, Silver was kidnapped by the Mask of Ice for his special skills in battle and to serve under him. It was there that he met and befriended Green, and together they escaped from the Mask of Ice and parted ways, but not before Silver gave Green his Horsea and received her Snubbull.

Silver had several cameos before he was formally introduced. He was the one who told Green of Lance's plan to summon a bird and they both believed that it was the Ho-Oh that kidnapped them as children, making Green think that the Elite Four was behind her kidnapping. It was, in fact, a Lugia so Silver was technically wrong and Green had decided to meet back up with him in Johto.

In his quest to take down the Mask of Ice and Team Rocket, Silver allied himself with Lance and stole a Totodile from Professor Elm's lab. In stealing the Pokémon, Silver made himself a rival in Gold, who thought that he was the one who stole his backpack that had all of his Pokémon in it and later because of his theft of Totodile. Before they could finish their first battle which had taken place at Professor Elm's lab right after Silver stole Totodile, Gold was knocked unconscious by several members of Team Rocket, who Silver subsequently defeated. During the battle, Gold was able to burn his hand forcing Silver to throw one of his gloves off. Because of this, Gold learned from the name emblazoned in the glove that the boy's name was Silver. Gold then tried to track him down for a while after learning from Professor Oak that Silver stole a Pokédex as well.

Silver and Gold meet for the first time at Sprout Tower.

Silver then goes to Violet City and talks to Lance in the Sprout Tower, running into Gold along the way and almost losing Totodile, until it was revealed that Totodile actually wants to stay with Silver because it bit Gold when he tried to get it back. When an iron wrecking ball was launched at them, Silver and Gold teamed up with their respective starters (Exbo and Totodile) to destroy the ball by rapidly heating the ball and then cooling it. Silver then disappeared again, with Totodile evolving into Croconaw.

Silver prevents the Rocket Grunts from entering Slowpoke Well Silver then takes a Black Apricorn to Kurt, who makes a Heavy Ball for him, saying that he only gives his balls to trainers he feels are qualified and that Silver is good enough. Silver used this Heavy Ball to capture an Ursaring. However, Gold ran into him while he was in the middle of the capture. Gold got in his way several times (for example when Aibo ran into Silver and made him drop his Heavy Ball). Silver then told Gold how to properly use Kurt's Balls. He stated that every Pokémon has a point that the trainer must hit with the ball in order for it to work (for Teddiursa, the crescent moon on its forehead and for Ursaring, its belly, for example). Gold re-payed Silver by using his Friend Ball and billiard cue to knock back Silver's Heavy Ball, and were both able to catch their targets. Silver then, once again, disappeared. He appeared at the Slowpoke Well in the middle of Team Rocket's Slowpoke Tail scam and defeated all of the Grunts single-handedly. Ursaring's claw marks were seen on one part of the well, so people quickly realized that it was him.

Silver then appears in Ecruteak City, looking over the damage from the air with his Murkrow. Jasmine's Amphy's flare then caught Silver's attention and he found her in the Tin Tower and decided to help her, only to run into Gold who thought he did harm to her instead. Before Gold could spark a battle, Silver just handed her over to him and left. However a mudslide left them trapped in the tower but Silver got Gold's Polibo to evolve into a Politoed and get them out right before they drowned in the silt, only to find out Team Rocket was the cause of the earthquake. Once Silver and Gold defeat the grunts they retreat and Gold requests a battle, to which Silver accepts. After a long battle he reveals several new additions to his team, a Kingdra that evolved during the exchange with Politoed, and a Tyranitar that wasn't his and thereby, could not control. He almost defeated Gold's whole team with it, but Togebo was able to defeat the Tyranitar.

The two boys eventually realized they share a common goal, however, as Gold was also trying to defeat the Mask of Ice. Together, Gold and Silver battled the villain at the Lake of Rage. It was here that the Mask of Ice revealed Silver's past to Gold; how he was kidnapped by him as a child. Because of this, Silver gained Gold's sympathy and respect. The two bounced back but were defeated, with their fates left unknown for a while. 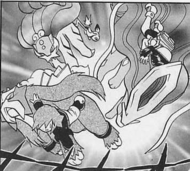 Silver returns from the time portal.

It is later revealed they were in the Whirl Islands, unconscious for a long time and watched over by Entei. They were found by Lt. Surge, and also met their fellow Johto dexholder Crystal and battled a Lugia that started attacking them, but failed to catch it. Silver then headed to the opening ceremony of the Pokémon League in an attempt to find the Masked Man, but Green teleported him away from there to save him. In the final confrontation in Ilex Forest, Silver fought against Will and won. Later, together with Gold and Crystal, he dove after Pryce into the time portal. The Pokédex holders made it out unharmed, but Pryce was stuck inside.

Silver and Yellow face against the Three Beasts.

In the fifth chapter, inspired by Green meeting her parents, Silver renews his quest to find the truth about his own past. This journey takes him to Viridian City, where he meets Yellow, who reads the mind of his Sneasel, who has a memory of the statue of Giovanni that further supports Silver's theory that he grew up in Viridian. Soon, two admins of Team Rocket, Sird and Orm, arrive and confronted Yellow and Silver in battle. After the battle, Sird revealed that Giovanni is, in fact, the father of Silver. 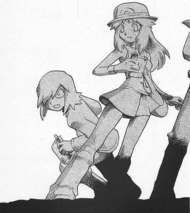 After hearing this, Silver fainted and was taken by Sird to the Team Rocket Battle Airship in order to reunite the boy with his father. When he awakes, Silver refuses to accept that Giovanni is his father and that he is the heir of Team Rocket. Although Silver was initially unhappy about his true heritage, Blue helped him realize that Giovanni has his qualities, and Silver uses his Ursaring to help rescue his father. He then helped the other Pokédex Holders support Red to keep the Battle Airship from crashing in Vermilion City. They celebrated the victory, but soon after their win, Sird turns Silver and his friends to statues with a beam intended for Deoxys.

Silver remains a statue for most of this chapter, and is only set free towards the end, when Emerald wishes Jirachi to do so. Along with the other Pokédex holders, Silver then joins the fight against Guile Hideout and his Feraligatr helps obliterate the giant Kyogre monster with its Hydro Cannon. Later, they are surprised when Red said that why won't they hold a match and each and every Pokédex Holder will join, it is known that Emerald won it.

Silver makes his return with a revamped outfit resembling his HGSS game counterpart, barring the notch of hair standing up in the latter. Here, he searches Lance's chambers after being informed of his absence, and finds company in the form of an angry, misunderstanding Clair and some Rocket-owned Koffing controlled by Petrel. Later, he meets up with Crystal and Eusine after his Sneasel and Murkrow evolve.