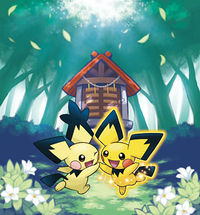 Shiny Pokémon are very rare forms of Pokémon that are different in color when compared to other Pokémon. The term 'shiny' is a reference to the sparking animation and sound effect when the battle starts. The term "shiny" in itself, however, was unofficial prior to Generation V, when the Pokédex began cataloguing shiny Pokémon and using the term itself.

The game has a way of deciding if a Pokémon is Shiny. In Generation II, when the Battle starts, the game picks four random numbers between 0 and 65535. If any of the numbers is less than eight, it is a shiny Pokémon. The chance of seeing one of these is about 1 in every 8192, or 0.0122%.
From Generation III onwards, shiny Pokémon are determined by other factors such as the Trainer ID number and the personality value of the Pokémon.

They can sometimes become shiny now when you got the right amount of SR (Soft Resets). This can be time consuming because of the amount of time spent constantly SRing. Achieving a shiny this way can take days, and even weeks.

There are a few different methods to increase your chances of obtaining a shiny Pokémon.

A method available in Diamond, Pearl and Platinum. This method uses the Pokéradar to encounter chains of the same Pokémon.

A method available in Generation IV-V. This method is when you breed to Pokémon, one from your game, and one from another countries game (Japan, UK, Europe, etc.). At first the chances of finding a shiny are 1/8192, if you use this method in Gen IV the chances are cut, to 1/2048, whereas in Gen V they are cut even more to 1/1365.3. So the chances of hatching a shiny are extremely easier. This method was created and announced by Junichi Masuda, director of GameFreak to add fun stuff to the game after you beat it. Such as shiny hunting, using the GTS, and more.

A method useful for Legendary Pokémon and Shiny Starters from Generation II-V. One method which is easy enough (but often very time consuming) works for starters and most Legendary Pokémon. Basically, the method is to stand in front of the legendary Pokémon you will catch/starter you will take and save. If you don't get a shiny when you get your starter/battle the legendary, soft reset the game by pressing A+B+Start+Select on the GBA and L+R+Start+Select on the DS. This method can easily require over 1000 resets before you get a shiny, however with enough dedication and patience your efforts can pay off.

In-game shiny Pokémon are met as part of the main story in some Pokémon games. For example, the Red Gyarados appears in Pokémon Gold, Silver, and Crystal Versions, and in the remakes as part of a story arc, and can be caught in a way similar to most legendary Pokémon.

In FireRed and LeafGreen, Trainers with a shiny Espeon, Seaking and Meowth can be battled inside the Trainer Tower on one of the Sevii Islands.

In Pokémon Black 2 and White 2, the player can catch a Shiny Haxorus in the Nature Preserve. The player can also receive a Shiny Gible or a shiny Dratini from Benga depending on their game version.