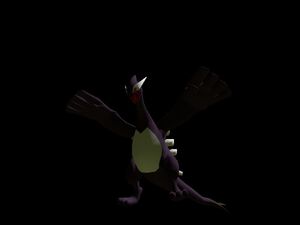 Shadow Lugia (XD001) is the only Shadow Pokémon to look different from its purified form. It is also the end boss of Pokémon XD: Gale of Darkness, the game in which it is named after.

It is the supposed unpurifiable Shadow Pokémon you catch in Pokémon XD when you confront Master Greevil. XD001 will appear before your battle with Master Greevil, once you catch or defeat it, then you have an instant battle with Greevil. The easiest way to catch it is to throw the Master Ball, but if you didn't get it from Prof. Krane, you'll need to battle it and use Ultra Balls. It is the most well known Shadow Pokémon. Shadow Lugia can only be caught in Pokemon XD Gale Of Darkness!

According to dialog in the game, XD001 is not able to be purified, however, this is not true. To do this, you must have every chamber in the Purification Chamber working at maximum strength.