From the Azurilland Wiki, a database for the Pokémon series that anyone can contribute to
Jump to: navigation, search
← Zangoose | Seviper | Lunatone →

Seviper (Japanese: ハブネーク Habuneiku) is a Poison-type Pokémon introduced in Generation III. Seviper has a sword-like shape at the end of his tail, that he uses for the move Poison Tail. When using Poison Tail, Seviper's sword tipped tail lights up purple. Seviper is sworn enemies with the Pokémon Zangoose, telling the fact that in real life Mongooses and Snakes are rivals. Ext's unobtainable in the wild but possible in a link trade with Daisy.

Seviper is a purplish Pokémon with golden "plates" on it's body. both of it's fangs are red but on side of it's face is light purple while the other side is a darker purplish color. It's eyes are also red and the also have gold "plates" on them.

Seviper has the ability Shed Skin and the hidden ability Infiltrator. Shed Skin may have a 30% chance of curing a stat aliment. Infiltrator prevents the effects of Light Screen, Reflect, or Safeguard.

Main article: Jessie's Seviper
File:Jessie's Seviper.png
Seviper in the Anime.
Seviper first appeared in A Tail with a Twist﻿. A Seviper is attacking other Pokémon to steal its food. Soon when the Gang has Lunch, May's Torchic is attacked by a wild Seviper and also gets its food taken. Ash's Treeko Sees it attacking Torchic and tries to help. After Treeko attacked it a few times the Seviper runs away. Later in the episode Jessie, James and Meowth and having a lunch. Once they ran out of food, Jessie gets a secret rice roll she was hiding from James and Meowth and while they where fight over it. The Seviper had its eye on Jessie's rice roll. The Seviper steals, and eats it. Jessie gets mad, however, the Seviper bites her hair. Jessie became very angry and attacked it. She almost killed it, but James and Meowth tell her to catch it, so she did. 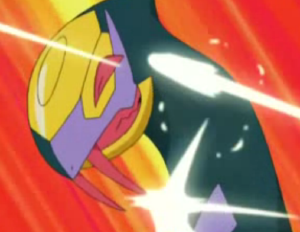 Seviper's name comes from the word "viper", and severe or serpent.