The Sea Crown is a legendary artifact located deep within the Sea Temple. It holds the key to controlling the Sea Temple, and is considered to be a valuable item.

The Sea Crown is situated into the base of the Sea Temple, and consists of a multitude of crystals embedded into a fountain-like object. This fountain is immersed in a veil of rainbow coloured water, which is contained within an unusual looking device in the ceiling. Upon encountering the Sea Crown, Manaphy jumps excitedly into the water pool.

The Sea Crown also is responsible for creating the energy bubble which surrounds Samiya to keep the water out, as well as controlling the gradual movement of the large city-like temple. It is also attributed with being responsible for making the Sea Temple invisible externally on all occasions barring the night of a lunar eclipse. 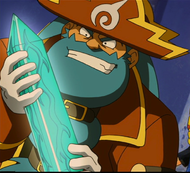 An individual crystal from the Sea Crown.

The crystals held within the water field are not difficult to remove from the Sea Crown, but when they are removed, it can lead to adverse side-effects. One such side-effect of removing any number of crystals from the Sea Crown can result in a power imbalance throughout Samiya, and allows water from the outside to freely travel through. The crystals that make up the Sea Crown are hexagonal in shape, and have a vine-like design snaking down the diameter.

After Phantom removes one of the crystals, the water barrier protecting the Sea Crown fluctuates, resulting in the water barrier to displace and come crashing down in a torrent of water. The process of water seeping into Samiya can be reversed by returning the stolen crystal back to the Sea Crown. When this happens, the Sea Crown glows with a bright yellow light, illuminating the entire chamber.

Ash imbued with the power of the Sea Crown.

The Sea Crown also has the ability to grant individuals who are kind-hearted with characteristics similar to that of Water Pokémon, in which the individual in question is able to breathe freely underwater. When this process takes place, the individual is immersed in the aforementioned yellow tendrils, which allows he/she to keep up with a high-speed water craft.