From the Azurilland Wiki, a database for the Pokémon series that anyone can contribute to
Jump to: navigation, search
← Grovyle | Sceptile | Torchic →

Sceptile (ジュカイン Jukain) is the Grass-type Starter Pokémon of the Hoenn region, introduced in Generation III. It resembles a cross between a tree gecko and a Dilophosaurus, with bladed leaves near its wrist and a cluster of seeds growing on its back. Its name is derived from "scepter", the staff of a king, and "reptile"; hence, it is known as the "King of the Jungle". Many trainers prefer this speedy lizard because of its decent amount of health and its high speed stat; it has an advantage in forests, jungles and other grassy areas, where it leaps among the trees with great agility and ambushes its opponents from above. It carefully tends its seeds, whose nutrients revitalize the trees around them. It has the Overgrow ability.

Sceptile can learn slashing moves. It learns Leaf Blade, X-Scissor, and Night Slash by leveling up, and Dragon Claw by TM.

Back Sprite of Sceptile in Gen. III

Sceptile is a green, Gecko-like Pokémon with yellow eyes and leaf-like spikes protruding out of its arms.

During the Battle Frontier arc, Sceptile was the most powerful Pokémon that Ash ever had and is arguably Ash's strongest grass type. Sceptile is voiced by Darren Dunstan (4Kids) and Bill Rogers (PUSA/TAJ) 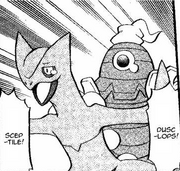 Sceptile and Dusclops in the Pokémon Adventures Manga.

In the Pokémon Adventures Manga, Emerald has a Sceptile.

Sceptile is the final evolution of Treecko to obtain this Pokémon level Grovyle up to level 36.