Satsuki is one of the five Kimono Sisters that appeared in Pokémon Johto League Champions and Pokémon Master Quest. Her Eeveelution is Jolteon. Her Kimono is purple. Her voice actress was Lisa Ortiz in the English dub. 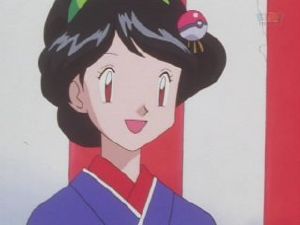 Satsuki in her kimono 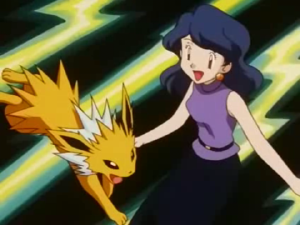 Satsuki might be the eldest sister because of how mature she sounds. She once stated that Sakura was too young to go on a journey of her own but after she saved her Jolteon from being captured by Team Rocket, she still said she had much to learn.

After Ash and co. returned to Ecruteak City Satsuki and Sakura's other older sisters went to a Pokémon dance seminar, but soon discovered it was a trap set by Team Rocket. After Sakura managed to save all of her sisters Pokémon, Satsuki and the others decided it was time for her to go with Ash and co on her journey, but after Sakura says she wants to go on her own journey, she fully supports her.