"You were able to handle your Butterfree so well, just after it evolved. Most impressive."
— Samurai complimenting Ash about his new Butterfree.

Samurai is a Pokémon trainer and character appearing in the episode Challenge of the Samurai. In the episode he meets and challenges Ash to a Pokémon match in the Viridian Forest, using his Pinsir and Metapod. His Pinsir is defeated by Ash's Metapod but their match is, after a long stand off between the two Metapod, abandoned when a swarm of Beedrill attack and steal Ash's Metapod. 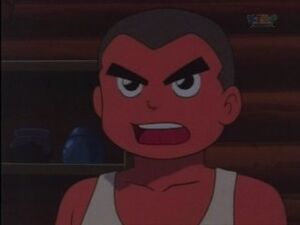 Samurai without his armor.

Samurai initially views Ash as an novice trainer, especially in comparison to the other trainers from Pallet Town (including Gary Oak). His opinion, however, changes when he sees Ash competently handle his Butterfree to defeat a swarm of attacking Beedrill, stating that he is the novice of the two.

Samurai has been seen in the opening theme of the Orange League but has not appeared in an actual episode since his debut.