Saffron City is a sprawling metropolis in the Kanto region. It lies between Celadon City, Vermillion City, Lavender Town, and Cerulean City.

Not only Saffron City is one of the biggest and busiest cities in Kanto, it is famous outside Kanto. The large Silph Co. HQ stands form as the cities center piece, while two gyms dominate the cities north-eastern corner district. Not only it is the business center of Kanto, it also holds the region's largest infrastructure, including the Magnet Train.

Saffron City is present in the Pokémon games; Red/Blue/Yellow, Gold/Silver, FireRed/LeafGreen and HeartGold/SoulSilver.

Ash goes to Saffron in the Anime in order to get the Marsh Badge,but was unable to beat Sabrina's Kadabra with Pikachu. He Contined his journey and later returned with a Haunter, however instead of battling Sabrina's Pokémon it chose to Play around, causing the emotionless Psychic to burst into laughter. as a reward, Ash was presented with the Marsh Badge 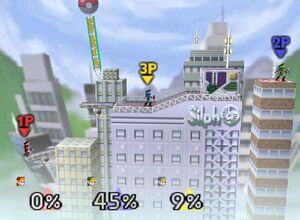 There is a stage named Saffron City in Super Smash Bros. on the Nintendo 64 device. It consists of three skyscrapers with two hovering platforms. Flying Pokémon, such as Butterfree and Fearow, appear in the background.