Sabrina's Mother is one of three Characters of the Day in IL024: Haunter Versus Kadabra. Her name was never revealed. 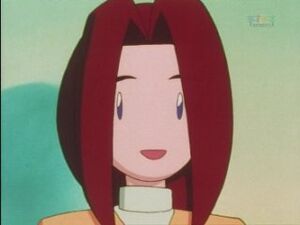 When Sabrina was younger, her mother tried to stop her from playing with her golf clubs but was unable to. With Sabrina's Psychic powers, she turned her into a doll and remained that way for many years.

She met Brock and Misty, who were also in a doll state and told them that Sabrina was a good girl, but was just lonely.

When Ash beat Sabrina, she turned her mother back into human form and is currently living with her daughter in Saffron City.