From the Azurilland Wiki, a database for the Pokémon series that anyone can contribute to
Jump to: navigation, search
← Delcatty | Sableye | Mawile →

Its special abilities are either Keen Eye or Stall. It hides in the darkness of caves. Its diet of gems has transformed its eyes into gemstones. As a Dark/Ghost-type, it has no weaknesses.

Sableye has deep, purple colored fur with little claws, pointed ears, and sharp teeth. It also had two big gemstones over its eyes, with a gem on its tummy and three gems on its back. It resembles a Hopkinsville goblin. 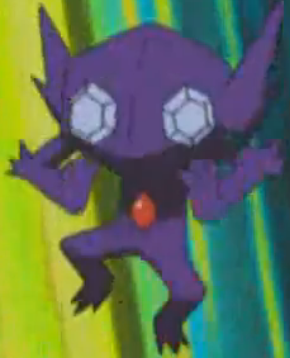 A Sableye in action!

Sableye first appeared in Ready, Willing, and Sableye. The Darkness Pokémon was playing jokes on Ash and his friends.

Cassidy's Sableye made a small appearance in Oaknapped.

Sableye has no evolutionary forms.

In this game the Sableye are the servants of Dusknoir, and are constantly spying on and trying to capture the player Pokémon in the world of the future. However, when Dusknoir reforms in the special episode, they do so as well. They demonstrate this by first attacking Primal Dialga to protect Dusknoir (though they are easily blasted away by his Roar of Time) and later by locating Primal Dialga when he is searching for a Passage of Time.