"Welcome! This is the Oreburgh Pokémon Gym! I'm Roark, the Gym Leader! I'm but one Trainer who decided to walk proudly with Rock-type Pokémon! As the Gym Leader, I need to see your potential as a trainer. And, I'll need to see the toughness of the Pokémon that battle with you!"
— Roark, Pokémon Diamond, Pearl and Platinum.

Roark (ヒョウタ Hyouta) serves as the Gym Leader for Oreburgh City's Gym. Raork specializes in using Rock-type Pokémon, and holds the Coal Badge for the trainers who defeat him.

Roark is the Oreburgh City Gym Leader in Pokémon Diamond and Pearl. When he's not at the Gym, he is the Oreburgh Mine's safety supervisor. Roark's specialty is Rock-Type Pokémon. He also uses a Fossil Pokémon, Cranidos.

If a player defeats him they will obtain the Coal Badge and TM76 (Stealth Rock). The Coal Badge will also give the player the ability to use Rock Smash outside of a battle. 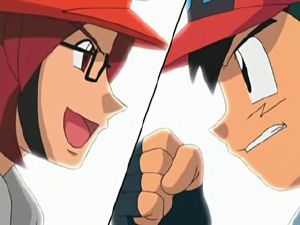 Ash in his Gym Battle with Roark.
Roark first appeared in the episode Shapes of Things to Come where both Paul and Ash show up at his Gym for a battle. Since Paul was the first to show up he was able to battle Roark first.

Roark, using a team of Geodude, Onix and Cranidos battled Paul's team of Azumarill, Chimchar and Elekid. Roark's strong abilities were shown as he was able to defeat two of Paul's Pokémon, though his Cranidos was unable to withstand Elekid's power leaving Paul the victor.

In the next episode A Gruff Act to Follow, Ash battled Roark the day after Paul's battle. Using a team of Pikachu, Turtwig, and Aipom, Ash battled his way through Roark's team. In the end though, Ash was defeated by Roark and would need to challenge him again.

In O'er the Rampardos we Watched, Ash would have a rematch with Roark using the same Pokémon. Roark's newly evolved Rampardos proved to be difficult but was defeated by Turtwig. With Roark's defeat, Ash had earned his Coal Badge.

Roark's Pokémon are the same in both the anime and Pokémon Diamond and Pearl with the exception of his Rampardos, which evolved from a Cranidos in the anime.