From the Azurilland Wiki, a database for the Pokémon series that anyone can contribute to
Jump to: navigation, search
← Munchlax | Riolu | Lucario →

Riolu (Japanese: リオル Riolu) is a Fighting-type Pokémon. It is believed that Riolu came after Lucario, due to the fact that Lucario first premiered in the Hoenn series anime movie Lucario and the Mystery of Mew. Riolu can be as loyal as an Arcanine and can be pretty hostile to strangers but warms up to people pretty fast.

Riolu is a black and blue, dog-like Pokémon nearing two and a half feet. Its appearance is similar to its evolved form Lucario, though there are some differences. Its legs and torso are colored black while its head, lower body and tail are blue. Riolu have large, rounded bumps on the backs of its forepaws, placed in a similar fashion to Lucario's spikes. Riolu also have a black "mask" with two black appendages on either side, and red eyes.

Riolu are sensitive to a special type of energy called Aura as Lucario is. Riolu's evolved form, Lucario, can use these waves for attacks, tracking, or to predict future moves. However, Riolu does not have the full potential of these powers, using them as described in ripples rather than waves. Moves such as Aura Sphere or Detect can not be learned by Riolu due to its inability to fully use the power of aura. 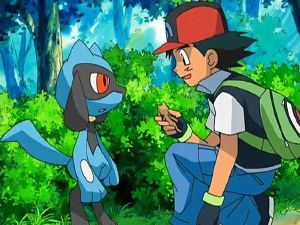 In the anime, Riolu has made an appearance during Pokémon Ranger and the Kidnapped Riolu! Parts One and Two, which aired as a one hour special commemorating the release of Pokémon Ranger: Shadows of Almia. This Riolu had been trained to use Aura Sphere and was unnaturally strong. It was taken away from its owner by a group that wanted to exploit it but Ash and co. returned it, with Kellyn's help. This Riolu developed a strong bond with Ash.

In the Pokémon Adventures manga, Maylene has a Riolu. It is seen using Drain Punch against Pearl's Monferno, who Platinum borrowed in order to fight her. Then, when Diamond's is traveling alone, he is given an egg by Riley, which eventually hatched into a Riolu. In Pokémon Diamond and Pearl Adventure! Hareta gained a Riolu egg in Serious Training on Iron Island which hatched into a Riolu later on in that chapter.

Riolu's name is simply based off of Lucario's name, switching "Rio" with "Lu" and leaving out "Ca".