Riley is a character that first appears in Iron Island. He can join the player during an event in Pokémon Diamond , Pearl and Platinum. He asks to join the player to the exit of the mine because he thinks it would be fun to have a partner. After defeating two team galactic grunts who happened to be in the cave, he will give the player a Riolu egg. He can later be found in Sinnoh's Battle Tower competing against the player. All of his Pokémon are versed in the Attack statistic.

Riley is similar in appearance to Sir Aaron from the movie Lucario and the Legend of Mew they both use the power of aura and both have a Lucario. 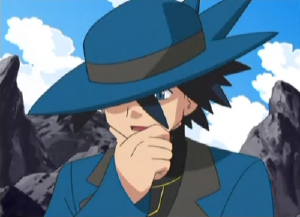 Riley in the anime.

Riley made his first appearance in the anime in Steeling Peace of Mind!. He is a Trainer specializing in Steel-types and is currently staying at Iron Island for the study of said type. Due to the strange behavior of the Steel-types on the island due to Team Galactic, he decided to investigate it with the help of his Lucario.

In Saving the World From Ruins! it was revealed that Riley is training to be a Aura Guardian with his Lucario and as such he is able to use aura effectively. He is shown to be an advanced user of aura as demonstrated in the episode.

After Team Galactic put bombs under the island after their plan was foiled, Riley and his Lucario trapped the explosion using their aura and sent it away from the island. Later he decided to help Professor Carolina in the study of the island so that he could know it better.

Riley can also team up with the player in a special co-op mode in the Sinnoh Battle Tower called Tag Battle. He also appears randomly in Pokémon Platinum in Buck's grandpa's house, which is located in the Rest Area. The player can challenger Riley to a battle, along with other Sinnoh Gym Leaders.