A Rich Boy is a Trainer Class introduced in Generation III. They are young men who wear fancy clothing, expressing their wealth. Their Pokémon typically aren't very strong, but Rich Boys give out many PokéDollars in return. Their female counterpart of the Rich Boy is a Lady. Their older counterparts seem to be a Gentleman. 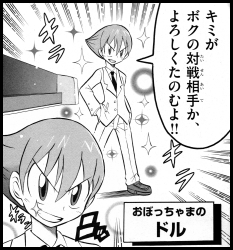 In PMBW04, Monta meets Dol, a Rich Boy in the Battle Subway, after Monta obtained 48 BP (Battle Points). He challenges Monta with a Bouffalant and a Swoobat. Monta challenges him with his Boldore and his Snivy. Monta starts by telling Snivy to use Grass Mixer on Bouffalant, but it had no effect due to Bouffalant's Herbivore ability. Bouffalant attacks Snivy with Horn Thrust and it instantly defeats Snivy. Monta orders Boldore to use a Rock-type move, but Swoobat uses Fly before it even hit. Bouffalant then defeats Boldore in one hit. Later in a forest, Monta rechallenges Dol. First, Swoobat uses Fly and Bouffalant uses Head Charge on Snivy, but it had no effect due to Snivy's use of Protect. Boldore uses Take Down to knock down Swoobat into the ground, and Swoobat retaliates and uses Heart Stamp on Boldore, but survived due to an effect of an item. Boldore then uses Earthquake, which hit all the Pokémon. Dol then tells Monta that the attack also hit Snivy, but Monta surprises Dol by showing that Snivy was holding an Air Balloon, which helped it. Swoobat and Bouffalant are slowed down due to the result of Earthquake, so Snivy uses Slam on Swoobat, and it faints. Boldore then finishes Bouffalant off by using Stone Edge. Dol is impressed that Monta had improved a lot since their battle in the Battle Subway and asks Monta that he would accept his battle invitation anytime, and Monta agrees to the rematch invitation.